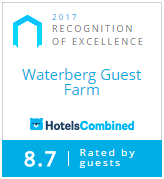 Your host, Harry Schneider-Waterberg, is a committed conservationist and was instrumental in establishing the Waterberg Conservancy.

The Waterberg Conservancy includes Waterberg Guest Farm, the Waterberg Plateau Park, the Cheetah Conservation Trust (CCF) and several surrounding ranches and forms a combined natural habitat of over 150 000 hectares committed to the conservation of flora, fauna and fragile ecosystems. Harry has served as chairperson of the Conservancy since its inception in 1995.

Until the early 90's Okosongomingo Ranch had been purely a stud ranch for Santa Gertrudis cattle and Arabian horses. When Harry took over management, he realized the urgent need for the conservation of natural resources and resource management of the arid environment. Bush encroachment, over-grazing and erosion were endangering the natural savannah.

Harry investigated non-consumptive use of the natural and national heritage, which lead to the holistic and sustainable use of natural resources - the only reasonable way of ensuring present and future use of the land.

The core function of the Waterberg Conservancy is the multi-level marketing of the diverse tourist attractions situated within the Conservancy with the members, who are all landowners, committed to a common management plan, aimed at the restoration and sustainable use of the natural habitat.

The rich diversity of wildlife, together with other animals such as giraffe, hartebeest, warthog, caracal and baboon, make this a wonderland for lovers of fauna and flora alike.

Waterberg Guest Farm is home to one of the last remaining, free-roaming Eland herds in southern Africa, and with a staggering 240 different bird species identified on the ranch, is a favourite amongst bird-watchers, both locally and abroad.